Yet another call for repression 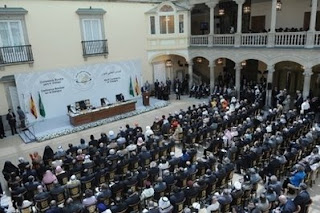 DhimmiWatch has a post on the conclusion of the Saudi-instigated "World Conference on Dialogue" in Madrid, and the declaration issued by its participants. Certain points in this document are worthy of note:

The participants also thank the Spanish Government for having the conference in Spain. This great country is home to a historical heritage that belongs to the followers of different religions and has contributed to human civilization.

As Debbie Schlussel points out, "is there something funny about a King who can't hold his phony interfaith conference in his own country, because it's illegal there?" Actually, King Abdullah's rationale isn't funny; it cames straight from the mouth of Islam's prophet Muhammad -- who, according to an authoritative hadith, declared: "I will expel the Jews and Christians from the Arabian Peninsula and will not leave any but Muslim." Moreover, a 2000 fatwa by the ruling clerics in Abdullah's country barred the construction of "houses of worship for unbelievers in the Arabian peninsula," baldly stating that "All religions other than Islam are heresy and error. ... Therefore, religion necessitates the prohibition of unbelief, and this requires the prohibition of worshiping Allah in any way other than that of the Islamic shari'a." And the reason Spain's "historical heritage ... belongs to the followers of different religions" is because the followers of one -- to wit, Islam -- invaded the place in 711, conquering and cruelly subjugating the followers of others -- to wit, Christianity and Judaism -- and ruling until their final expulsion in 1492.

... the participants affirm the following principles: ...

5. Respecting heavenly religions, preserving their high status, condemning any insult to their symbols, and combating the exploitation of religion in the instigation of racial discrimination.

"Based on the above, the conference has adopted the following recommendations: ...

5. To work on urging governmental and non-governmental organizations to issue a document that stipulates respect for religions and their symbols, the prohibition of their denigration and the repudiation of those who commit such acts. (Emphases mine.)

This, of course, is another demand for the repression of free speech regarding Islam and its scriptures, traditions and adherents, as called for by UN Special Rapporteur "on contemporary forms of racism, racial discrimination, xenophobia and related intolerance" Doudou Diène in a Feb. 20 report to the UN Human Rights Council: "The main challenge is now to define the threshold for legitimately restricting freedom of expression in order to protect the victims." (Emphases mine. The report number is A/HRC/7/19; to access it on the linked page, scroll down to the number and click "E" for the English version.)

Note also the conflation of race and religion in the above, which has become standard operating procedure among Muslim propagandists.
Posted by Papa Whiskey at 4:19 AM