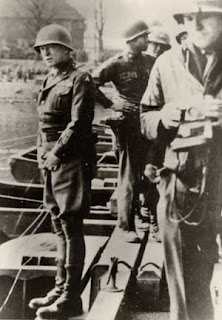 Memorial Day was yesterday, but this picture of Gen. George S. Patton whizzing into Germany in March 1945 seems worth posting withal.
Posted by Papa Whiskey at 1:21 PM No comments:

Burying the lede in Seattle 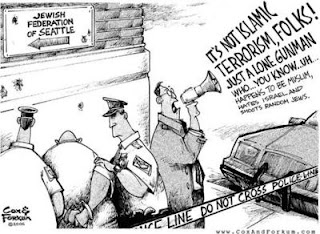 In the second paragraph from the end of an AP story on closing arguments in the murder trial of Naveed Haq -- in which writer Gene Johnson, like Seattle Times reporter Natalie Singer the day before, completely omits Haq's declarations of Muslim identity and anti-Jewish enmity -- the hollowness of the defense's claims of innocence by reason of insanity stands revealed:

"Haq did not mention to psychiatrists the notion that he was being controlled by voices or by God until many months after the shootings."

During the killings and after his arrest, of course, Haq made the following statements:

"This is a hostage situation and I want these Jews to get out."

For her part, Singer mentions neither this central fact nor Haq's statements in her own write-up for today's Seattle Times. So much for the people's right to know, in Seattle and nationwide, as the American mainstream media continue their malign efforts to exculpate and defer to Muslims.

And pray spare a thought for Pamela Waechter, whom Haq killed, and Dayna Klein, Christina Rexroad, Layla Bush, Cheryl Stumbo and Carol Goldman, whom he wounded in his rampage. None of them merited so much as a single mention in either of these MSM news reports.
Posted by Papa Whiskey at 11:52 AM 1 comment: 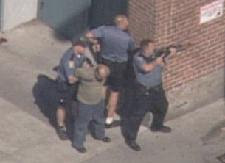 It will be recalled that Naveed Haq, who is on trial for killing a woman and wounding five other people at the Jewish Federation of Greater Seattle in July of 2006, was heard during the incident and after his arrest to have made the following statements:

"This is a hostage situation and I want these Jews to get out."

In a story today headlined "Dueling diagnoses may hold key to Jewish Federation shooter's fate," Seattle Times reporter Natalie Singer not only neglects to report any of Haq's three declarations, she manages to get through a rather long news piece without mentioning Islam, Muslims, Pakistan, the Middle East, or anything else that might hold the slightest hint that jihad ideology could have played a part in this crime -- when it was clearly uppermost in the perpetrator's mind. Whether this was her doing or that of her editors, it is chilling evidence of the lengths to which the contemporary mainstream news media will go to exculpate and defer to Muslims and their invidious creed.
Posted by Papa Whiskey at 6:49 PM No comments: