A lie fit for a king 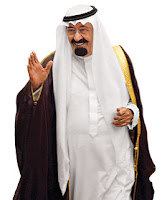 On the eve of the Saudi-instigated interfaith "World Conference on Dialogue" in Madrid, the Arab News has a story with several specious statements from Saudi King Abdullah bin Abdul Aziz al-Saud. The most preposterous one, for my money, is this:

"We have adopted a comprehensive anti-terror strategy that not only focuses on the security side but also includes preventing financing of terrorism and dealing with its intellectual roots as well as rehabilitating the followers of deviant ideologies after giving them counseling.” (Emphasis mine.)

In view of the just-released report on hatemongering in Saudi school textbooks by the Center for Religious Freedom of the Husdon Institute, this is patently false. The center found that the textbooks "assert that unbelievers, such as Christians, Jews, and Muslims who do not share Wahhabi beliefs and practices, are hated 'enemies.' Global jihad as an 'effort to wage war against the unbelievers' is also promoted ... Lessons remain that Jews and Christians are apes and swine, Jews conspire to 'gain sole control over the world,' the Christian Crusades never ended, the American universities of Cairo and Beirut are part of the continuing Crusades, the Protocols of the Elders of Zion are historical fact, and on Judgment Day 'the rocks or the trees' will call out to Muslims to kill the Jews."

Nor is this the first, or even the second time this issue has come up. Again and again, the Saudis have been found to be filling the heads of their elementary and secondary school students with enmity toward the Western world, Christians, and Jews. Each time, officials of the kingdom solemnly assure Western media and officials that the offensive material will be removed or altered, and it never is. And yet the king of Saudi Arabia, spiritual center of the Muslim world, has the cosummate gall to assure us that his realm is "dealing with the intellectual roots" of terrorism. This flagrant lie bespeaks a contemptuous attitude that is right in line with several Qur'anic verses, notably 48:29 (Muhammad is the messenger of God, and those who are with him are hard against the unbelievers and merciful one to another ...) and 98:6 (The unbelievers ... are the worst of creatures ...).

Let the West take heed of this attitude and its scriptural wellsprings -- and wise up.

Update: Welcome, Jihad Watch readers -- and many thanks to Robert Spencer for the link.
Posted by Papa Whiskey at 12:12 AM