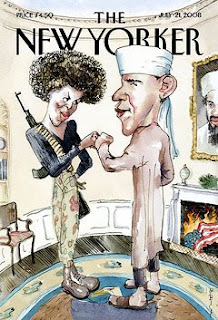 The Obama campaign is moistening its collective knickers over a cartoon on the New Yorker's cover this week depicting The Great Man and his bitter half as a fist-bumping pair of Third-World revolutionaries. Though its target is obviously Barack Obama's opposition, his minions are not amused. Huffed spokescreature Bill Burton, "most readers will see it as tasteless and offensive. And we agree." New Yorker editor David Remnick argued that this thin-skinned attitude is misplaced, asserting that the cartoon "combines a number of fantastical images about the Obamas and shows them for the obvious distortions they are."

Both sides miss the point. What's really a distortion about this cartoon is the way it mocks the entirely legitimate apprehensions the Obamas engender in most Americans through their own words and proposals.

People don't perceive Michelle Obama as a Black Panther; they perceive her as snappish, bossy, arrogant and resentful because of her statements about Americans being "mean," "cynical," and having "broken souls" inflicted by a country where "folks set the bar, and then you work hard and you reach the bar -- sometimes you surpass the bar -- and then they move the bar!" (That this beastly state of affairs hasn't prevented her from waltzing into a $121,910-a-year job that bestowed upon her a raise to $316,962 in one year is lost upon no one -- except, perhaps, the oh-so-sophisticated editors of the New Yorker.) Her declaration that "Barack will never allow you to go back to your lives as usual, uninvolved, uninformed" was also, to put it politely, grating.

And they don't worry about Obama putting up a poster of Bin Laden in the Oval Office, they worry about him using the power of that office to compromise their most fundamental rights, including the right to free expression. Consider his recent assertion that "hate crimes against Hispanic people doubled last year" because a "certain segment has basically been feeding a kind of xenophobia" and "Rush Limbaugh and Lou Dobbs" have been "ginning things up." This clearly indicates that Obama views "ginning things up" through criticism of a self-designated victim group as tantamount to inciting hate crimes, and therefore esentially a hate crime in its own right. Accordingly, what might his response be to the demands of Secretary General of the Organization of the Islamic Conference Ekmeleddin Ihsanoglu and U.N. Special Rapporteur "on racism, racial discrimination, xenophobia and related forms of intolerance" Doudou Diène for laws against the "scourge" of "Islamophobia," intended to silence those of us who have the temerity to resist the encroachment of Islamic supremacism through exposure, analysis, criticism and raillery?

At first glance, the New Yorker's snarky send-up seems rather puckish -- but a hard look at the propsect of an Obama presidency brings to mind a line from an old radio show: " 'Tain't funny, McGee!"
Posted by Papa Whiskey at 3:48 AM