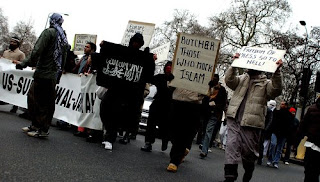 The ever-informative Raymond Ibrahim, translator and editor of The Al-Qaeda Reader, notes in a post at Jihad Watch this morning that Shahid Malik, the British government's first Muslim minister, is "trying to subtly conflate race and religion" in remarks on British TV reported in the UK Telegraph.

Another practitioner of this gambit is UN Special Rapporteur "on racism, racial discrimination, xenophobia and related forms of intolerance" Doudou Diène in his recent reports to the UN Human Rights Council:

"The Special Rapporteur invites the Council, in measures adopted to combat racism and discrimination, to take fully into account the increasing intertwining of race, ethnicity, culture and religion that characterizes the current political and ideological context ..."

"The growth of incitement to racial and religious hatred and the resurgence of manifestations of anti-Semitism, Christianophobia and, more particularly, Islamophobia ... can be attributed to the following: conflation of race, culture and religion ... and the supervisory and security-based approach to the practice and teaching of Islam."

"Throughout his term of office, the Special Rapporteur has highlighted one of the central causes of the resurgence of racism and its increasing complexity: the conflation of racial, cultural and religious factors."

It bears noting that Diène just completed a two-week tour of the United States, during which he was shepherded around the country by the ACLU to listen to the complaints of sundry racial activists. His office has announced that his report on the tour will be released next spring -- most likely on the eve of the "Durban II" conference in Geneva at which "Islamophobia" will be the primary bugbear.
Posted by Papa Whiskey at 6:37 AM