Not too bad to be true

This report appeared in the online Washington Times today:

"Apostasy killing of former Muslims could become widespread in the United States if the U.S. government and Americans don't "wake up," a panel of three former Muslims said on Capitol Hill Thursday.

"The talk, hosted by three members of the new civil rights organization Former Muslims United, marked the first public appearance as a self-proclaimed "apostate" of Iranian journalist Amil Imani, president of the group. Imani and the panel's two other speakers, authors Nonie Darwish and Wafa Sultan, told the audience that ingrained American religious and ethnic tolerance and myths about Islam are combining to gravely threaten the West."

A Muslim commenter going by the handle of "mustafakhattab" quibbled that "nowhere in the Qur'an will anyone find a verse say kill the apostates [sic]" and enquired, "Isn't what they say too bad to be true?!" No, it isn't. As "mustafakhattab" doubtless knows very well, Muhammad's mandate to kill apostates is found not in the Qur'an but in a hadith in Sahih Bukhari (Volume 9, Book 84, Number 57):

Narrated 'Ikrima: Some Zanadiqa (atheists) were brought to 'Ali and he burnt them. The news of this event, reached Ibn 'Abbas who said, "If I had been in his place, I would not have burnt them, as Allah's Apostle forbade it, saying, 'Do not punish anybody with Allah's punishment (fire).' I would have killed them according to the statement of Allah's Apostle, 'Whoever changed his Islamic religion, then kill him.' "
Posted by Papa Whiskey at 7:23 AM 5 comments: 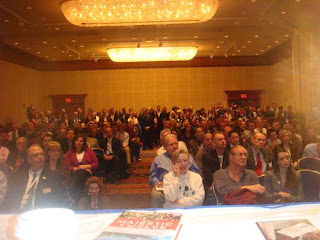 This was a stirring event with dynamic speakers, each with a compelling story. Former Defense Department analyst Stephen Coughlin was exceedingly informative, and his point that official American self-censorship regarding Islam and jihad has given the enemy a "decisive victory in the information battlespace" was truly chilling. Coughlin, whose perceptions got him crosswise with Deputy Defense Secretary Gordon England’s Muslim sidekick Hesham Islam and later excluded from the DoD, insisted that those entrusted with protecting Americans from Islamic terrorism have a “professional duty to know” about the roots of said terrorism’s doctrine in Islamic scripture and tradition. After all, he pointed out, the murderous rampage at Fort Hood, Texas, by Muslim U.S. Army Major Nidal Hasan had a “doctrinal driver,” as evinced by Hasan’s own presentation to his Army medical colleagues calling for Muslim service personnel to be accorded conscientious objector status lest “adverse events” occur. The enemy, Coughlin observed, has stated his doctrine. Can we, he enquired, be politically correct and threat-focused at the same time? No way – because, he concluded, “You cannot defeat an enemy you will not define.” Coughlin's thesis on jihad doctrine may be accessed here. It is lengthy but gripping, and is a must-read.

Psychiatrist Wafa Sultan, a native of Syria and now an American, gave a ringing indictment of Islam – a creed, she declared, that is “not merely a religion but an extremely dangerous adversary that aspires to world domination.” Sultan, who had the grit to take on a Muslim cleric in his own Arabic tongue on Al-Jazeera TV, pointed out that the Islamic teachings cited by Muslims who demand an exemption for their co-religionists from new airport scanning techniques are the very teachings that motivated 19 Muslims to fly airliners into the World Trade Center towers and the Pentagon on 9/11, thus necessitating the scanning in the first place. This she characterized as “absolutely outrageous.” She concluded by quoting Thomas Paine in her exhortation to resist Islam "now - right now!" Sultan has written a book about her experiences, titled “A God Who Hates: The Courageous Woman Who Inflamed the Muslim World Speaks Out Against the Evils of Islam” (St. Martin’s Press).

Simon Deng, African-born and now an American, appeared, he said, as "a voice for those who have no voice," remaining as they do under Islam's yoke in his native Sudan. He told of being captured by Arab bands as a child and enslaved for three years. But today, he declared, “I stand before you as a free man in a free nation.” He warned Americans against complacency in the face of the international jihad. Anders Gravers of Denmark, leader of SIOE (Stop the Islamisation of Europe) and Elisabeth Sabaditsch-Wolff of Austria, who is facing spurious “hate speech” charges in her native country, spoke eloquently about the grim situation regarding Islam and free speech in Europe. And Allen West, a retired U.S. Army light colonel and a candidate for Congress in the 22nd District of Florida, referred in his talk to the Treaty of Hudibayah and Muhammad's letter to the Byzantine Emperor Heraclius, showing that he has read into the history of Islamic imperialism (truly a rarity among politicians). “Sharia (Islamic law) is incompatible with who we are,” he declared, pointedly adding that “I’m not living as a dhimmi (Islamic subject).” He concluded by quoting Ronald Reagan’s succinct policy - “We win, they lose!” – in which the crowd joined in, giving him a thunderous ovation afterwards.

This event was a great lift. Listening to these brave leaders gave me hope and rekindled my own resolve. Kudos to Robert and Pamela for getting them together and ensuring they were heard.