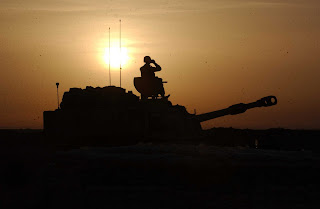 This morning Robert Spencer at Jihad Watch posted an elegy to the conservative activist Paul Weyrich, who died today. In the comments thereto, a Muslim troll who posts under the moniker of "Abdullah Mikail" responded to Spencer's characterization of Weyrich as a man "determined to defend the West and present the truth" about Islam with the snide quip that "he knows the truth now." Several commenters having taken him to task for the implication that the deceased is now suffering the sundry torments prescribed in the Qur'an for unbelievers, he protested that he had made his statement with "no malice intended." This struck your correspondent as being very much in line with Muhammad's dictum (recorded in the hadith collection of Bukhari, Volume 4, Book 52, numbers 268, 269) that "War is deceit," and I made a brief post to that effect. This prompted a declaration that I am an "idiot who thinks you are at war."

One generally oughtn't to get sucked into these Internet micturition competitions, as they can be a great waste of time. However that may be, I composed a rejoinder that seems worth putting up here:

"Listen up, boy. I know I'm at war with the odious creed of Islam, because the book the adherents to said creed hold to be the immutable word of God has made that incontrovertibly clear. For example, Verse 9:29 commands Muslims to:

Fight those who believe not in Allah nor the Last Day, nor hold that forbidden which hath been forbidden by Allah and His Messenger, nor acknowledge the religion of Truth, (even if they are) of the People of the Book, until they pay the Jizya with willing submission, and feel themselves subdued.

And were there any doubt as to the gist of that Qur'anic mandate, the exegis of Ibn Kathir clears things up. In his tafsir on Verse 9:29, that eminent Muslim scholar explained that "subdued" means

... disgraced, humiliated and belittled. Therefore, Muslims are not allowed to honor the people of Dhimmah or elevate them above Muslims, for they are miserable, disgraced and humiliated.

Ibn Kathir goes on to note in this tafsir that

`Umar bin Al-Khattab, may Allah be pleased with him, demanded his well-known conditions be met by the Christians, these conditions that ensured their continued humiliation, degradation and disgrace.

He also lists Umar's conditions, among which are that

We will not teach our children the Qur'an ...

Indeed. The better to keep them in ignorance of Islam, the malign creed whose true believers will ever be at war with free men who refuse to 'feel themselves subdued.' "
Posted by Papa Whiskey at 4:34 PM 6 comments: