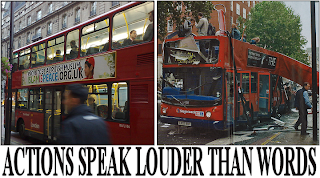 Her excellent piece in the UK Daily Mail on the day after the third anniversary of the London subway and bus attacks includes this succinct summing up of Old Blighty's situation:

Britain still doesn't grasp that it is facing a pincer attack from both terrorism and cultural infiltration and usurpation.

Phillips goes on to explain how this is happening, and so numerous are the parallels to what is afoot in the U.S. -- though at an earlier stage -- that her piece strikes a distinct chill. Examples:

Believing that Islamic terrorism is motivated by an ideology which has 'hijacked' and distorted Islam, (the government) will not acknowledge the extremism within mainstream Islam itself.

No less a personage than the president of the United States has consistently pushed this patently spurious notion. For example, George W. Bush assured all and sundry on Oct. 11, 2002, that "Our enemy doesn't follow the great traditions of Islam. They've hijacked a great religion."

... the universities are steadily being Islamised, with academic objectivity in the teaching of Islam and Middle East studies being set aside in favour of indoctrination and propaganda.

See Martin Kramer's Ivory Towers on Sand: The Failure of Middle Studies in America for details of how this has also been happening in the U.S.

Deeply alarmed sources have furthermore told me that, in the overriding concern by police forces to hire more ethnic minority officers, they have junked vetting criteria -- particularly when it comes to hiring Police Community Support Officers, who after two years can become fully fledged police officers with no further vetting required. The result, say these sources, is that the security of police operations is potentially compromised.

Normal vetting procedures were also junked at the Pentagon in the case of Hesham Islam, a top aide to Deputy Secretary of Defense Gordon England and a Cairo-born Muslim who remains at his post despite a resume that was shown to be shot through with lacunae and falsehoods during the recent controversy over the status of Pentagon analyst Stephen Coughlin, author of a trenchant treatise on Islam and jihad.

Phillips's piece is a must-read, as is her book Londonistan.

(Hat tip to KafirCanada for the image.)
Posted by Papa Whiskey at 10:26 PM