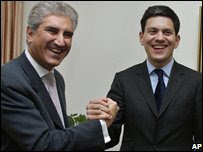 The Pakistani newspaper Pak Tribune reports today (Hat tip: Weasel Zippers) that following a meeting in Islamabad with Pakistan's foreign minister Monday, British Foreign Secretary David Miliband tried to ingratiate himself with his Muslim hosts with a gratuitous slap at the Counterjihad.

"We strongly denounce the anti Islam propaganda blitz being unleashed in Europe in the name of freedom of expression," he declared. Miliband was doubtless refering to the recent release on the Internet of Dutch MP Geert Wilders' short film "Fitna," which juxtaposes Qur'anic passages exhorting the faithful to "strike terror" into the hearts of unbelievers (8:60) and to "smite at their necks" (47:4) with video clips of contemporary Muslims doing just that in New York on 9/11, in London and Madrid, and with a decapitating knife in Iraq. Wilders, who was thwarted in his efforts to get his production run on Dutch TV, was merely trying to tell the simple, brutal truth: that when militant Muslims attack unbelievers -- even the unarmed and helpless -- they are following the scriptures of their creed, propounded by its founding prophet and held to be the irrefutable command of the almighty. That Miliband, whose countrymen have been repeatedly attacked by such fanatics, should "strongly denounce" such truth-telling should earn him the kind of obloquy Neville Chamberlain received after caving in to Hitler's demands at Munich in 1938.

This is unlikely to happen -- not only because public discourse in Britain has long been hobbled by the dictates of post-colonial political correctness, but because Miliband's toadying may well go unreported by British media. While the Pak Tribune led its story on the Islamabad meeting with the foreign secretary's dhimmi remark, the BBC omitted it from its own report altogether.

Update: A check of sundry British media -- to wit, the Times, Daily Mail, Guardian, Mirror, and Reuters -- reveals not a single mention of Miliband's remark.
Posted by Papa Whiskey at 2:06 PM No comments:

In tomorrow's edition, the British Daily Telegraph reports that "Serb prisoners had their internal organs removed and sold by ethnic Albanians during the Kosovo war, according to allegations in a new book by the world's best known war crimes prosecutor. Carla Del Ponte, who stepped down in January as chief prosecutor at the Hague tribunal for crimes committed in the Balkan wars of the 1990s, said investigators found a house suspected of being a laboratory for the illegal trade. ...

"Miss Del Ponte reports that the allegations were made by several sources, one of whom 'personally made an organ delivery' to an Albanian airport for transport abroad, and 'confirmed information directly gathered by the tribunal.'

"According to the sources, senior figures in the Kosovo Liberation Army were aware of the scheme, in which hundreds of young Serbs were allegedly taken by truck from Kosovo to northern Albania where their organs were removed. Miss Del Ponte provides grim details of the alleged organ harvesting, and of how some prisoners were sewn up after having kidneys removed."

This story has a familiar ring: in the notorious 2006 Turkish film "Valley of the Wolves," a Jewish-American doctor working in the Abu Ghraib prison was depicted doing this to Iraqi prisoners -- which, of course, was an update on the old "blood libel." In the film, Muslims were the victims of the horror -- but that was mere fiction, a pot-boiler plot cooked up for the entertainment of a Muslim audience in a Muslim country. The Kosovo allegations, however, deal with reality and are far more substantive, coming as they do from a former war-crimes prosecutor writing on the record. And in this instance Muslims were not cast in the role of victims but perpetrators.

This ought to give pause to the Bush administration, which is so determined to send the Muslim world a terrific signal by setting up Kosovo as "a Muslim-majority state inside the European whole."

It ought to -- but given the deferential habits into which the president and his minions have fallen, it won't.
Posted by Papa Whiskey at 9:04 PM No comments:

Striving for the right kind of divide 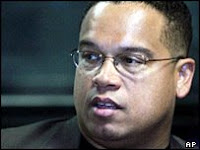 Keith Ellison, the Muslim congressman from Minnesota, advised a CAIR-hosted "Muslim Youth Leadership Symposium" in the Chicago area last week that "teachings in the Koran could help the racial divide in America."

Could they, now? And what, pray, might said teachings be? Perhaps those such as 3:28, 4:144, 5:51, 48:29, 60:1, 60:4, et al., which exhort the faithful to insularity and hostility toward the kuffar, thus replacing the racial divide with a religious one. Hardly an improvement, it would seem -- unless the latter is a desideratum, which of course it is, if jihad is the objective.
Posted by Papa Whiskey at 2:14 AM 1 comment: 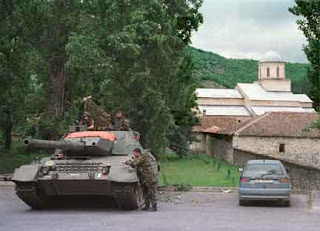 This item is a little old -- it's dated March 14 -- but is still of interest. It's an "interview" on a State Dept. Web site with Ambassador Frank G. Wisner, U.S. special envoy for Kosovo, concerning the independence of that Serbian province, that makes clear that the Bush administration's support for the same is a way to make nice with the Muslim world. Excerpt:

"... I believe that for most of the Muslim world, it’s very important that one looks at a matter of justice. What is right: a people sought to practice its faith, the country is largely Muslim, inside a European context. To make certain that happens is in the interest of the entire world, notably in the Muslim world.

"To be able to secure a Muslim-majority state inside the European whole is a terrific signal that the Muslim world and the non-Muslim word can live side by side in peace and cooperation, one with the other." (Emphasis mine.)

Never mind what "a Muslim-majority state inside the European whole" -- to wit, the Ottoman Empire -- has meant historically: the cruel subjugation of non-Muslim "dhimmi" populations, as per the Qur'anic mandate (in verse 9:29) that they be fought until they "feel themselves subdued." And as to "matters of justice," what about the Orthodox Christians of Kosovo, whose shrines and monasteries (such as the one above, guarded by an Italian tank) are under constant Muslim threat, even under KFOR occupation? What kind of "signal" does this send to them?
Posted by Papa Whiskey at 12:00 PM No comments: