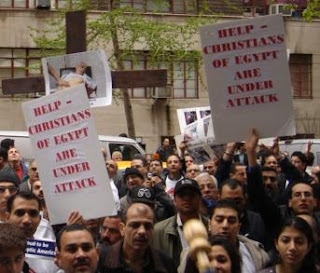 Raymond Ibrahim, translator and editor of the indispensable Al-Qaeda Reader, has a report at Dhimmi Watch about a May 31 attack on the Coptic Abu Fana monastery in El-Menya, Egypt, by some 70 armed Bedouins that left numerous monks badly injured. His cogent commentary leaves no doubt that this was a Muslim pogrom:

"Father Antonias, who was there, said that many 'disparaging' words were hurled against Christianity by the Muslim assailants during their rampage, which, incidentally, included the destruction of altars and torching of Bibles. As the Bedouin terrorists were destroying the monastery, for instance, one monk reached for the cross, to which one of the Arab assailants mocked: 'Hah! Let’s see if the cross saves you!' to which the stoic monk replied, 'Truly, you do not know the power of the cross.' "

Hard on the heels of this incident came another assault on Egypt's Copts, this one on June 19 in Al-Nazla. As the site of the Free Copts reports, "The attackers shouted 'Allah Akbar' and 'Kill the infidels' as they hurled stones at their Christian neighbors’ homes." The June 19 pogrom also included the following:

* Stones were hurled at St. Mary’s Church, shattering the windows
* Stones were also hurled at the house of Father Shenouda Moussa
* A hairdresser’s salon was vandalised and the hairdressers beaten. It was however spared from burning because the owner of the building is a local Muslim
* A chemist owned by a Christian local, Dr. Adeed, suffered some damages
* Damages to two phone/internet facilities owned by Christians
* A truck owned by Gamil Hanna was completely destroyed
* A chicken farm owned by Gamil Hanna Farag was looted and burned
* A two-story building owned by Boulos Fouad was burned
* Mr. Ezzat Labib, member of the city council, was beaten and his brother Kamal Labib also seriously injured
* The mob attacked the house of Hanna Melik and beat him and his family
* A wholesale deli owned by Milad Awad was looted
* Mrs. Mimi Awad’s home was broken into and burgled

Will the United Nations, in the person of its Special Rapporteur "on racism, racial discrimination, xenophobia and related forms of intolerance" Doudou Diène, address the plight of the Copts? That, I take leave to doubt: after all, Mr. Diène has far more pressing duties to attend to -- to wit, laying the propaganda groundwork for next April's "Durban II" conference in Geneva, at which "Islamophobia" will be at the forefront of the agenda.

Mr. Diène's religious affiliation has been carefully omitted from all three of the thumbnail biographies I could find of him on the Web (at the sites of his own UN office, the Organization of American States, and the ACLU), but as he hails from Senegal, a country with a 95 percent Muslim population whose national motto is "Un Peuple, Un But, Une Foi" ("One People, One Goal, One Faith"), it may plausibly be surmised that the Abu Fana monastery's attackers were his co-religionists -- and that his silence in the face of this outrage reflects Muhammad's dictum in Qur'an 48:29:

Muhammad is the Messenger of God, and those with him are hard against the unbelievers, merciful one to another.

Addendum: The Free Copts site notes that a resolution, HR 1303, has been introduced in the U.S. House of Representatives that calls upon the Egyptian Government to respect human rights and freedoms of religion and expression in Egypt. A letter or e-mail to your representative requesting support for it would be time well spent.
Posted by Papa Whiskey at 4:20 PM

I posted on this several weeks ago, following the third attack on the Copt monastery this year, and the various other violent incidents committed against regular Copts and their businesses.

Another Ancient Tradition of Oppression and Torture

That place may well be the old Christian monastery still extant, predating Western monasticism by centuries.

What is amazing is how the Copts have managed to exist since the Muslim hordes overran Egypt more than a millenia ago.

In a poverty-stricken, corrupt country, the Copts have maintained their existence as the necessary educated clerks to largely ignorant higher-ups. They would have been wiped out a thousand years ago except that the conquerors found them useful; they still do.

Copts fill a very necessary niche in an otherwise violent place. If they did not, they would have been wiped out entirely, as so many other sects were across Persia, India, Egypt, etc.

So the continual harassment, destruction, and individual murders will continue, but they won't permit the Copts to be exterminated. Egypt needs them and the government knows this quite well.

That doesn't mean it won't permit the atrocities to continue at a low level, especially on Friday evenings after the rabble-rousing "sermons" get adrenalin going and the Muslims pour out of their mosques looking for Christian blood.