A big win in Denmark 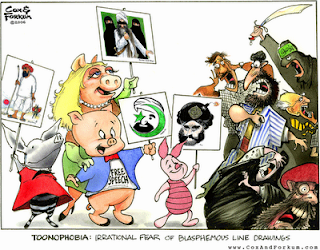 The Western High Court of Denmark has ruled against Danish Muslims who had sued the newspaper Jyllands-Posten for publishing 12 caricatures of their creed's prophet Muhammad in 2005. The Muslims charged that the paper had defamed their religion and its prophet, but the court, according to an International Herald Tribune report, "ruled that terror acts have been carried out in the name of Islam, and that it was not illegal under Danish law to make satirical drawings to illustrate that."

This is excellent news, and a firm rebuke to those who have sought sanctions against Jyllands-Posten, advancing spurious claims of "hate speech." Among them are self-described "Muslim African-American law professor" Bernard Freamon of of Seton Hall University Law School, who claimed in a Feb. 19, 2006 article in The Jurist that "Muslims are ... very right to vigorously condemn the publication of the cartoons and to seek to punish the editors through the criminal law process" and called Danish prosecutors' refusal to charge Jyllands-Posten's editor under a "hate speech" statute "a patent abuse of their discretion and a blatantly political decision."

"They ought to revisit it," Freamon declared. "The issue should be decided by a Danish court." Now it has, and the ruling is a big win for those of us determined to defend our right to free expression in the face of Islam's worldwide campaign to abrogate it.

Muslim zealots, however, are determined to see their critics silenced. Appallingly, for an American law professor, Freamon in his Jurist article questioned "the continued viability of a liberal and universalist approach to free expression in our rapidly changing and increasingly pluralist world," and the spurious concept of "Islamophobia" is specifically designed to undermine that viability. In his Feb. 20 report to the United Nations Human Rights Council (the report number is A/HRC/7/19; to access it, scroll down to the number and click "E" for the English version), Special Rapporteur "on contemporary forms of racism, racial discrimination, xenophobia and related intolerance" Doudou Diène decried the "selective and political interpretations of human rights and fundamental freedoms, manifested inter alia by the ideological pre-eminence of freedom of expression" (Item 6, p. 5) and "the growing trend of defamation of religions arising from the following factors: the conflation of race, culture and religion; the growing use of religion for political ends; and the intellectual and ideological questioning of religion" (Item 56, p. 16). To equate "intellectual and ideological questioning" with "defamation" and to assert that the defense of one's right to it is "selective and political" is rhetorical tyranny, the object of which Diène makes clear in his statement that "The main challenge is now to define the threshold for legitimately restricting freedom of expression" (Item 53, p. 15 -- emphases mine).

Let all who cherish their right to say and publish what they think take heed of the words of Thomas Jefferson in his Notes on the State of Virginia in 1782: "The time to guard against corruption and tyranny, is before they shall have gotten hold of us. It is better to keep the wolf out of the fold, than to trust to drawing his teeth and claws after he shall have entered."
Posted by Papa Whiskey at 5:47 AM