"Terrorist act"? That is cool. 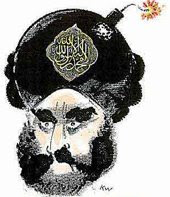 Pakistani Ambassador to Norway Rab Nawaz Khan, reacting to a cartoon recently published in the Norwegian newspaper Addresseavisen, has declared to Norway's TV2 that " 'Muslim societies all over the world will be insulted. Therefore it's a terrorist act." (The quote comes from the Norwegian newspaper Aftenposten, by way of the blog Islam in Europe.)

The absurdity of Khan's words call to mind Abraham Lincoln's crack about the South's antebellum calumnies in his Cooper Union Address of Feb. 27, 1860:

"That is cool. A highwayman holds a pistol to my ear, and mutters through his teeth, 'Stand and deliver, or I shall kill you, and then you will be a murderer!' "

The analogy is by no means inapt, as an implicit threat Pakistan's government plans to make to the European Union shows. According to that nation's Daily Times, a high- level six-member delegation will soon journey to Brussels to demand that Europeans "amend laws regarding freedom of expression in order to prevent offensive incidents such as the printing of blasphemous caricatures of Prophet Muhammad (Peace Be Upon Him) and the production of an anti-Islam film by a Dutch legislator". They will tell them that "the recent attack on the Danish Embassy in Pakistan could be a reaction against the blasphemous campaign" and warn them that "if such acts against Islam are not controlled, more attacks on the EU diplomatic missions abroad could not be ruled out." (Hat tip to the indispensable JihadWatch, whose director Robert Spencer makes a ringing statement of resolve to defend free expression here.)

Thus does a Muslim government use the acts of Muslim terrorists as leverage against the West's most basic rights -- while denouncing the exercise of those rights as a "terrorist act." In view of such hoodlum diplomacy, the words with which Lincoln concluded his speech are also worth recalling:

"Let us have faith that right makes might, and in that faith let us, to the end, dare to do our duty as we understand it."

Addendum: Here is the cartoon that prompted Khan's asinine comment: 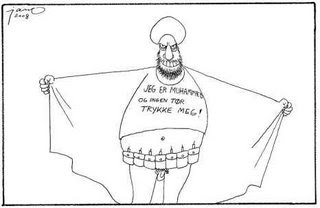 The slogan reads, "I am Muhammad and nobody dares print me!" According to Islam in Europe, both the cartoonist and Adesseavisen's editor deny that this was ever intended to be a caricature of Muhammad himself, but instead "shows a terrorist who commits violence in the prophet's name." It seems the distinction has been lost on "the prophet's" followers.

Addendum 2: Gates of Vienna has an excellent post on this, complete with a translation from the Norwegian of a news story containing another choice quote from Pakistani ambassador Rab Nawaz Khan:

"Don’t forget that there are many Norwegian companies in Pakistan."

Such subtle, nuanced diplomacy. And be it noted that the car bombing at the Danish embassy which Pakistani officials propose to cite in their warning to the European Union (see above) was an attack for which al-Qaeda claimed responsibility, describing it as "only the first drop of rain."
Posted by Papa Whiskey at 3:42 AM