The menace to free expression 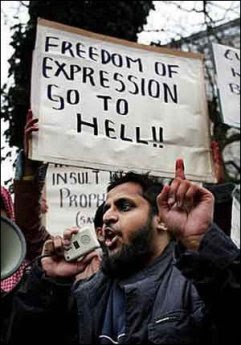 At his indispensable news site JihadWatch, Robert Spencer has posted a grim warning on the present danger to the right of free expression. Citing an article in today's New York Times noting American exceptionalism in allowing the expression of sentiments that in most other Western nations run afoul of "hate speech" laws, he warns that "We are far closer to restrictions on free speech than most people realize, with even the Times quoting learned analysts in favor of such restrictions." He points out that under laws of this sort, "true statements about Islam and jihad will be suppressed, and precisely as Islamic supremacists are pressing forward as never before with their program of stealth jihad against the West." He notes that United Nations Special Rapporteur "on contemporary forms of racism, racial discrimination, xenophobia and related intolerance" Doudou Diène "is working on restricting free speech, and American Muslims are helping him."

An indication of Diène's efforts in this regard may be seen in a report the Senegalese lawyer submitted Feb. 20 to the Human Rights Council (the report number is A/HRC/7/19; to access it, scroll down to the number and click "E" for the English version). In this document, he denounces "trivialization of racism and xenophobia, particularly through its use as a political tool." This, he maintains, is creating "ethical, psychological and political conditions that have directly contributed to the increase in incitement to racial and religious hatred."

"Futhermore," he asserts, "the ideological context is characterized by the emergence of rhetoric based on the notion of a conflict of civilizations and religions, as reflected in the discourse of certain political, intellectual and media elites." Therefore, he declares, "The main challenge is now to define the threshold for legitimately restricting freedom of expression in order to protect the victims." (Emphases mine.) Diène attempts to suger-coat this poisonous pill with soothing talk of "strengthening the complementarity of freedom of expression, freedom of religion and belief, and the discouragement of racial, ethnic or religious hatred," but what he is calling for is crystal clear: the repression of any discussion or analysis of a "conflict of civilizations and religions" -- to wit, the global jihad -- that may plainly be seen by anyone unhampered by the willful blindness of the real "political, intellectual and media elites."

Earth to Doudou Diène: The "complementarity" (which Webster's defines as "necessary interrelationship or correspondence") of freedom of expression and the discouragement of hatred needs no strengthening by the likes of you. It already exists, and every day, every hour, it manifests itself when the former is used to accomplish the latter. Under your notion of "legitimately restricting freedom of expression," the discouragement of hatred would in fact be weakened, not strengthened -- becaused those who dare to criticize, analyze or make mock of the hatred, the intolerance, and the tyrannical aspirations at the center of Islam's global jihad would be barred from doing so by the coercive power of the state.

But that will not happen. Restrictions on free expression are not and cannot be legitimate, and we who defend the right thereto will resist them as long as there is breath in our bodies. We are not so few as you might think, and we are resourceful. We are resolved. And we will not submit.
Posted by Papa Whiskey at 7:29 AM

The Koran is the epitome of "Hate Speech"...haven't any of these people ever actually read it?