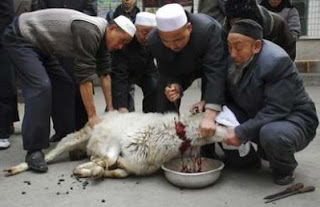 The blog Sweetness & Light, which assembled a stomach-turning collection of photos of Muslims around the world celebrating Eid al-Adha (the "festival of sacrifice" with which the holy month of Ramadan concludes) last year, has another assortment of grotesqueries from this year's blessed event. 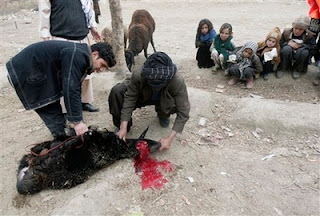 This is what the president of the United States, in a White House message Wednesday wishing "our Muslim citizens ... a memorable celebration," declared "helps ensure the important values of compassion and devotion are passed on to future generations." (Emphasis mine.) Nor should it be supposed that this sort of thing only goes on overseas, as a story from a North Carolina TV station, telling of Muslim efforts to overturn a judge's ban on a "mass slaughter of lambs" by "hundreds of Muslim families" at a Smithfield, N.C. farm, shows. The ban was imposed not because of the ritual's primitive savagery but because of agricultural officials' concern over the farm's lack of sanitary facilities. The judge pointed out that the ban "doesn't prevent the free exercise of religion because the families are allowed to slaughter their own lambs at a state-licensed facility."
Posted by Papa Whiskey at 9:46 PM