Half-stepping on a hit case 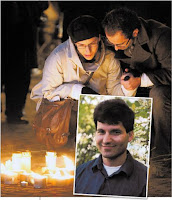 Both Gates of Vienna and the Eastern Star News Agency have translations today of an article in the Swedish press by freelance journalist Nuri Kino taking to task the Swedish authorities for their lassitude in investigating the Dec. 11 murder of Professor Fuat Deniz at his institution's campus in Örebro, Sweden. Deniz, whose research focused on the genocide campaign carried out against Assyrian Christians by Muslims of the Ottoman Empire at the same time as the better-known Armenian genocide, was struck in the neck with an edged weapon; a manner of killing mandated in at least two verses (8:12 and 47:4) of the Qur'an.

Kino, like Deniz a Swedish Assyrian originally from Turkey, went to Örebro to check things out. He found that:

* No security or "any other form of support" had been offered by Swedish authorities to Deniz's family; a "nervous" widow and a three-year-old daughter.

* Deniz's campus office had not been sealed off.

* Deniz's academic colleagues, including those who have received threats, expressed "shock" at the "lack of knowledge regarding ethnic, political and religious clashes" on the part of the police.

* Despite declaring on radio news that a security-camera picture of a blood-spattered man taken in a store the day of Deniz's killing is "uesless," Örebro police have ignored an offer of assistance from a technical specialist in cleaning up such pictures.

* When Kino called Örebro police, he was told that their public information officer was on vacation and the lead prosecutor in the investigation is out sick - without anyone acting in his stead. Moreover, "police in Örebro will be reducing the number of police on duty over the coming holiday period."

So as the already-cold trail of Fuat Deniz's killer gets even colder, the so-called defenders of justice in Sweden can't be bothered to pursue it. They're too busy feasting, guzzling and relaxing. What an absolute disgrace!

And speaking of disgrace, the performance of the Anglophone mainstream media on this story has been no less shameful. A search of the following sites for Fuat Deniz's name reveals not so much as a word of coverage:

Apparently the assassination of an internationally eminent genocide researcher is just too picayune to garner the attention of the media elite. Had Baron Bodissey at Gates of Vienna not broken this story in the U.S., we would know nothing of it.
Posted by Papa Whiskey at 11:02 AM