On Eid al-Adha, a greeting and a goof-up 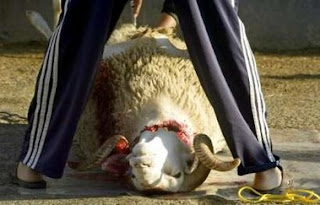 At Jihad Watch today, Robert Spencer analyzes the implications of a seemingly innocuous White House greeting to Muslims on the occasion of Eid al-Adha, the annual "festival of sacrifice" with which the holy month of Ramadan concludes. He points out that when President Bush praises Muslims for "honor[ing] Abraham's obedience" (in being willing to sacrifice his son at God's command), he is unwittingly praising a faith that, in a Qur'anic verse (60:4), calls Abraham an "excellent example" when he declares his "enmity and hatred forever" for those who do not "believe in Allah and in Him alone" – but not when Abraham pledges to his pagan father to pray for forgiveness for him. The president, he observes, "is thus inadvertently reinforcing a worldview that takes for granted the legitimacy of everlasting enmity and hatred between Muslims and non-Muslims – and doing so precisely in the context of trying to build bridges between Muslims and non-Muslims."

I voted for George W. Bush twice, but I am heartily sick of his ignorance of and deference to Islam. Unhappily, his successor is unlikely to be any better in this regard.
Posted by Papa Whiskey at 9:52 AM