A slaughter in Sweden 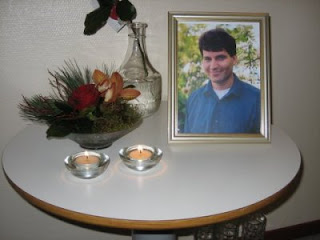 On Tuesday evening, Fuat Deniz, 40, a lecturer in sociology at Örebro University in Örebro, Sweden, was attacked with an edged weapon in a campus building. His assailant inflicted multiple wounds on his neck, from which, despite surgeons’ efforts to save him, he soon died. He left behind a widow, Runa, and a three-year-old daughter.

Deniz was a Christian Assyrian who immigrated to Sweden from Turkey with his family as a child. His forebears were survivors of one of the great historical crimes of the last century: the Ottoman Empire’s jihad genocides against its Christian minorities during World War I and thereafter. That Ottoman Muslims – Turks, Kurds and Arabs – carried out a genocide against the Armenians of that empire has been firmly established (depsite continuing Turkish denials) due to the work of Vahakn Dadrian and others, but their simultaneous butchery of Assyrians, Nestoreans and Greeks is far less well-known.

Fuat Deniz was trying to change that. His academic research focused on the Assyrian genocide, an episode on which he had become an authority. In fact, he was slated to speak Sunday at an international conference on Assyrian identity and the Assyrian genocide held at the University of Leiden in the Netherlands.

He never made it – and his academic colleagues are now in fear for their own lives. For, according to Professor David Gaunt of Sweden’s Södertörn University College, who worked with Deniz, this was only the latest incident in a campaign of intimidation carried out against academics in his field. In a story in Saturday’s edition of the Swedish newspaper Svenska Dagbladet, Gaunt told of being tailed by security police during travels in Turkey and subjected to a smear campaign in the Turkish press. Moreover, Gaunt told the paper, “On several occasions at our seminars people would attend claiming to be journalists, only to then walk around photographing delegates.”

“All those interested in Christian minorities in Turkey are considered a threat,” he added.

And they are a threat to more than just Turkish sensitivities. At a European Parliament conference held Mar. 26 in Brussels, panelists declared that Turkey, which is trying to gain admittance to the European Union, must acknowledge its Ottoman-era genocides and open its archives from the period before being allowed to do so. Speakers included members of the European Parliament from Sweden and Germany – and Professor Gaunt.

Turkey has a great deal to cover up, as an extensively documented article in the Canadian journal Genocide Studies and Prevention reveals. Writing in the journal’s December 2006 issue, Florida International University Law School Professor Hannibal Travis argues that “the hesitation to recognize the Assyrian genocide is unjustified, for the evidence is overwhelming that Turks and their Kurdish allies massacred tens, and more likely hundreds, of thousands of Assyrians in order to exterminate the Christian population.” Citing contemporary American and British press dispatches, the famous British Foreign Office “Blue Book,” eywitness accounts from both victims and German military officers assigned to the Ottoman Empire (a German ally) during World War I, and many other sources, Travis paints an appalling picture of massacre, plunder, rapine and scarcely imaginable suffering. As many as a quarter of a million Assyrians and other Christians perished along with the more than one million Armenians who died.

The evidence also makes clear that, like the attacks on the Armenians, this was emphatically a jihad genocide. As Travis notes, “On November 14 1914, less than two weeks after the Ottoman Empire declared war on the Entente (Great Britain, France, and Russia), the Sultan, still acting as a figurehead for the Young Turk regime, declared a jihad or holy war ‘against the enemies of Islam, who have proven their hostility by their attacks on the Caliphate.’ The next day, a key CUP (Committee of Union and Progress – the ‘Young Turks’) official led a march through Istanbul ‘meant to demonstrate the people’s agreement with the Sultan’s declaration of holy war against the enemies of Islam.’ The sheikh al-Islam, a CUP appointee and the highest religious authority in the Ottoman regime, endorsed the declaration of jihad and proclaimed it in print; violence against Christian Armenians quickly followed. These declarations of jihad ‘incited wrath toward Christian minorities in the Ottoman lands and ... later facilitated the government’s program of Genocide against the Armenians’ – and, as it happened, the Assyrians.”

That Fuat Deniz’s killer, who remains at large, was carrying on the jihad tradition is strongly indicated by the cause of the professor’s death: multiple wounds with an edged weapon to the neck. This is the manner of killing directly mandated by Islam’s prophet Muhammad in two Qur’anic verses:

Sura 8, Verse 12 – Remember thy Lord inspired the angels (with the message): “I am with you: give firmness to the Believers: I will instill terror into the hearts of the Unbelievers: Smite ye above their necks ...”

Should this prove to be the case, Fuat Deniz would not be the first descendant of jihad genocide survivors to pay with his life for resisting Turkish Muslims’ decades-long antagonism toward the truth. On Jan. 19, newspaper editor Hrant Dink was gunned down in front of the Istanbul office of his bilingual Turkish-Armenian weekly newspaper, Agos. With his resolute candor about the Armenian genocide, Dink had long been a thorn in the side of Turkish authorities, who charged him repeatedly with the “crime” of “insulting Turkishness.” His confessed killer, a teenager who was heard to shout “I shot the infidel” as he was leaving the scene, was later shown after his arrest in a video clip on Turkish television, unrepentantly posing with the crescent-emblazoned Turkish flag as his police captors beamed in approval.

Kudos to Baron Bodissey at Gates of Vienna for breaking this story on this side of the pond.
Posted by Papa Whiskey at 2:13 AM

And you sir, what you write above is nothing more than a smear campaign aimed at Turkey and the Turks.

While the identity of the assailant still remains a mystery, you have already started your smear campaign WITHOUT PROOF, only based on HEARSAY and ASSUMPTIONS.

And then you consider yourself a good Christian who is democratic and tolerant????

Have you ever heard of the saying "INNOCENT UNTIL PROVEN GUILTY" ?? Do you have proof in your hand at this very moment that the assailant was, in your own words "a jihadist"??

Same goes for the so-called Armenian and Assyrian genocides, up to this date, has any of this been proven at international tribunals like Nurenberg or the Hague?? The only tribunal carried out in Malta by the British immediately following the first world war against the presumed leaders of the so-called genocide, ended by the acquittal of all of the accused, as there was no evidence found!

FYI: Ottoman archives are now wide open for anyone who wish to examine them. Parts of it can even be reached online!