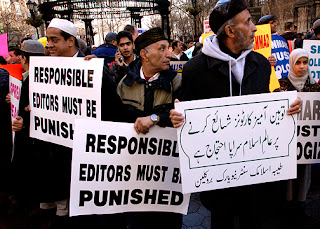 Robert Spencer has an excellent article at Human Events today on a "media guide" the Council on American-Islamic Relations (CAIR) has made available exclusively to "media professionals." Unsurprisingly, it instructs the latter to avoid such "common misperceptions" as "the notion ... that the Qur'an teaches violence." In order to comply, of course, the media professional must disregard verse after verse of Islam's holy book: 9:5, 9:14-15, 9:29, 9:123, 8:12, 47:4, etc., etc., ad nauseam. That being the case, Spencer's accuation that CAIR's objective here is to "marginalize and then end discussion of the dangers inherent in Islam" is spot on.

But Muslim diktats to the media are no innovation of CAIR’s. Hardly had the ashes of 9/11 cooled when the Society of Professional Journalists adopted a set of “diversity guidelines” at the behest of the American Muslim Council that included:

* Seek truth through a variety of voices and perspectives that help audiences understand the complexities of the events in Pennsylvania, New York City and Washington, D.C.

* Seek out people from a variety of ethnic and religious backgrounds when photographing Americans mourning those lost in New York, Washington and Pennsylvania.

* When writing about terrorism, remember to include white supremacist, radical anti-abortionists and other groups with a history of such activity.

* Avoid using word combinations such as "Islamic terrorist" or "Muslim extremist" that are misleading because they link whole religions to criminal activity.

* Avoid using terms such as “jihad” unless you are certain of their precise meaning and include the context when they are used in quotations. The basic meaning of “jihad” is to exert oneself for the good of Islam and to better oneself.

* Use spellings preferred by the American Muslim Council, including "Muhammad," "Quran," and "Makkah ," not "Mecca."

* Ask men and women from within targeted communities to review your coverage and make suggestions.

These prescriptions for journalistic dhimmitude were adopted at the organization’s 2001 national convention in Seattle on Oct. 6. They remain in force, and are prominently posted at the group’s Web site (link above).
Posted by Papa Whiskey at 11:27 AM