'Islam is not a religion of peace.' 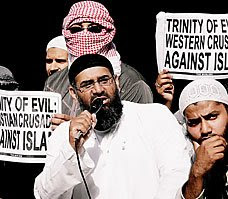 UK imam Anjem Choudary lays it on the line in London's Evening Standard:

This, in a report on British Muslim reaction to "tough new measures to name and shame foreign-based extremists and prevent them coming from abroad to stir up hatred in the UK." More money quotes, spoken to an enthusiastic meeting of 200 London Muslims:

It is our religious obligation to prepare ourselves both physically and mentally and rise up against Muslim oppression and take what is rightfully ours. Jihad is a duty and a struggle and an obligation that lies upon the shoulders of us all. We will not rest until the flag of Allah and the flag of Islam is raised above 10 Downing Street.

Do not obey the British law. We must fight and die for Islam - this is the map and road to Jennah [heaven].

You must destroy the West.

Delete unnecessary material from your computers, take precautions not to attract attention to yourself and prepare your family for [police] raids.

-- Abu Rumaysah, a student at the London School of Shari'ah

Say what one will about once-Great Britain and its current misleadership, at least several mainstream papers in the UK are willing to report candidly on "The Prophet's" followers. All we get on this side of the pond is the kind of pathetic pap noted and quoted in the foregoing post.

UPDATE: Robert Spencer, having been alerted to this story by your correspondent, has a post on it at Jihad Watch. Robert's new book, "Stealth Jihad: How Radical Islam is Subverting America without Guns or Bombs," is now out and should be read by all.
Posted by Papa Whiskey at 9:24 AM

FOR THE OBVIOUS PURPOSE OF MAKING MONEY AN IMMIGRATED MUSLIM WOMAN AND HER SON FALSELY AND INTENTIONALLY ACCUSE A 73 YEARS OLD SWEDISH PENSIONER FOR MURDER THREAT - SHE DEMANDS SEK 50,000 ($8,000) IN DAMAGES.