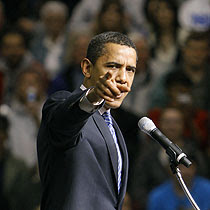 Andrew McCarthy has written an article for National Review Online entitled "Obama's assault on the First Amendment." It is spot-on, and deserves to go viral.

Moreover, McCarthy sums up in one paragraph not only what Obama is trying to keep from scrutiny but what must compel our active opposition to his candidacy:

"... his radical record, the fringe Leftism that lies beneath his thin, centrist veneer, his enabling of infanticide, his history of race-conscious politics, his proposals for unprecedented confiscation and distribution of private property (including a massive transfer of American wealth to third-world dictators through international bureaucrats), his ruinous economic policies that have helped leave Illinois a financial wreck, his place at the vortex of the credit market implosion that has put the U.S. economy on the brink of meltdown, his aggressive push for American withdrawal and defeat in Iraq, his easy gravitation to America-hating activists, be they preachers like Jeremiah Wright, terrorists like Bill Ayers, or Communists like Frank Marshall Davis."

We have a month to stop this creature -- and if we fail, we face the menacing prospect of another Lyndon Johnson-style transmogrification of America.
Posted by Papa Whiskey at 8:06 AM