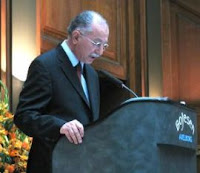 On Oct. 22, Secretary General Ekmeleddin Ihsanoglu of the Organization of the Islamic Conference addressed a UNESCO meeting in Copenhagen; a follow-up to the "Rabat Conference on Fostering Dialogue among Cultures and Civilizations through Concrete and Sustained Initiatives" held in Morocco on June 14-16, 2005. In his speech, Ihsanoglu revisited a theme on which he has been harping for some time -- to wit, the intolerability to the Muslim world of the quintessential Western value of freedom of expression when that freedom is employed in the exposure, analysis, criticism, or mockery of the odious creed of Islam, and the goal of that world to suppress the same through laws prohibiting it. Excerpts:

"... in exercising the fundamental right of freedom of expression, one should act within the responsibility inherent in this freedom, through showing respect to the rights of others, and refraining from incitement for hatred, causing hurt to others or eroding their basic human right [sic]."

"... the OIC has never had any problem with the freedom of expression, on the contrary we regard it as a fundamental value and advocate it in the Muslim World within our new vision. The point we have been making is that the abuse of this right, in a way to contradict and violate the international human rights documents, should not be allowed.

"... we should not allow the extremists and opponents of diversity in both the Muslim world and the western societies to derail our joint endeavors and manipulate and exploit the interaction between the ones who are yearning for respect to their ethnic, racial and religious identities and values and the others who are misled to misperceive that their fundamental human rights of freedom of expression are challenged or under attack by the Islamic world." (Emphases mine.)

Ihsanoglu's speech and his organization's ongoing campaign are part and parcel of what Robert Spencer noted in June is "a worldwide and ongoing movement by Islamic jihadists and their allies and dupes to classify all critical examination of Islamic supremacism as "hate speech." This would render us, he added, "mute and hence defenseless in the face of the jihadist onslaught," for "true statements about Islam and jihad will be suppressed, and precisely as Islamic supremacists are pressing forward as never before with their program of stealth jihad against the West." (Emphasis original.)

Spencer concluded his June post with a warning that "we are far closer to restrictions on free speech than most people realize." Now, with only a week to stop the Obamachine's grasp for power and forestall its dire consequences, the truth of his statement is more stark than ever.
Posted by Papa Whiskey at 9:10 PM

Ishanoglu came to Finland as well, here is personal account: