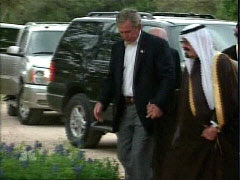 In an article this morning in Human Events, Robert Spencer comments on a memo by Donald Rumsfeld, quoted in a Washington Post story, in which the former SecDef "lamented that oil wealth has at times detached Muslims 'from the reality of the work, effort and investment that leads to wealth for the rest of the world. Too often Muslims are against physical labor, so they bring in Koreans and Pakistanis while their young people remain unemployed,' he wrote. 'An unemployed population is easy to recruit to radicalism.' "

Now this observation didn't require any particular insight – just eyesight. But the White House, horrified by the prospect of the plain truth roiling "hearts and minds across the Arab and Muslim world," scrambled to pre-emptively placate that world: "I can understand why they would be offended by those comments," said its spokesman Dana Perino (presumably feeling himself subdued).

Spencer regrets that "The release of the Rumsfeld [memo] could have been an occasion for the White House to call the Saudis to account for the double game they have long been playing in regard to jihad terrorism. ... Another opportunity missed."

Not missed. Passed, and quite deliberately. This administration has no intention of calling the Saudis to account for anything – not the hate-filled education their children receive, nor the boatloads of boodle with which they furnish our mortal enemies, nor their harboring of legions of hate-spewing jihadist clerics.

It will just keep clutching their hands – and kissing their asses.
Posted by Papa Whiskey at 10:07 AM

Saudi tendrils (and tentacles) are deeply embedded in our Administration (top man has tentacle around his neck) and the perennial, purchased Saudi-philes in the Arabist State Dept. Ex-ambassadors to Saudi Arabia must be suspect. Who knows how many legislators these oil-rich nouveau-riche Arabs have bought?

Anyhow, knowing the problem does not bring us a solution. This is wanting. The options are not pleasant but unfortunately necessary.