The Times of London has an eye-opening article today on Saudi Arabia’s role as a wellspring of jihad terrorism. It notes that while the Muslim monarchy has taken some steps to reverse this – in a belated recognition that not just foreign infidels but the regime itself were becoming targets –

“... the Saudis’ ambivalence towards terrorism has not gone away. Money for foreign fighters and terror groups still pours out of the kingdom, but it now tends to be carried in cash by couriers rather than sent through the wires, where it can be stopped and identified more easily.

“A National Commission for Relief and Charity Work Abroad, a nongovernmental organisation that was intended to regulate private aid abroad to guard against terrorist financing, has still not been created three years after it was trumpeted by the Saudi embassy in Washington.

“Hundreds of Islamic militants have been arrested but many have been released after undergoing reeducation programmes led by Muslim clerics.”

Well, that ought to straighten them out!

“School textbooks still teach the Protocols of the Elders of Zion, a notorious antiSemitic forgery, and preach hatred towards Christians, Jews and other religions, including Shi’ite Muslims, who are considered heretics.”

Nor is “education” of this sort limited to the kingdom itself, as the curriculum of the Islamic Saudi Academy in Alexandria, Va., right across the Potomac from our own national capital, shows. As the U.S. Commission on International Religious Freedom noted in an Oct. 19 press release,

“The Saudi curriculum continues to be the subject of U.S. concern and the Saudi government and embassy, despite repeated U.S. government requests, have failed to disclose it. Several studies, including by Saudi experts themselves, have pointed to serious concerns that these texts encourage violence toward others, and misguide the pupils into believing that in order to safeguard their own religion, they must violently repress and even physically eliminate the ‘other.’”

The “other,” of course, being infidels such as you and me, who must be either converted to Islam, reduced to dhimmi subjugation, or killed – all in accordance with Islamic scripture, to wit: Qur’an 9:29, Sahih Muslim 4294, et al. 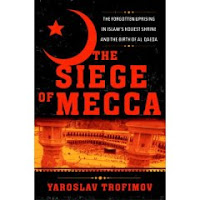 Saudi Arabia's current toxicity is due in large measure to a deal the House of Saud cut with the Wahhabi clerics during the 1979 takeover of the Grand Mosque in Mecca by Juhayman al-Uteybi and several hundred followers of his Muslim fundamentalist sect. Under this accord, as Yaroslav Trofimov writes in his indispensable new book, The Siege of Mecca, the senior ulema (Muslim clergy) decided that

"The House of Saud, despite all its failings, had to be shored up in its hour of need. As King Khalid requested, they would sign a fatwa, reaffirming the regime's Islamic legitimacy. But from now on, the Saudi rulers would have to live up to their Islamic obligations. There should be no more women on TV, no more licentious movies, no more alcohol. The social liberalization that had begun under King Faisal should be halted and, where possible, should be rolled back. And billions of Saudi petrodollars should be put to good use, spreading the rigid Wahhabi Islam around the planet. ... the ulema essentally asked al-Saud to adopt Juhayman's agenda in return for getting rid of Juhayman himself."

Juhayman was accordingly defeated (with an assist by the French) and lost his head – but won his point. The fancy mosque that went up in the early '80s not far from where I live (and at which one of the notorious "Flying Imams" preaches) probably wouldn't be there but for him. The Saudi terror-coddling policies described in the Times piece may also be laid at his door. Few today remember the Grand Mosque takeover – the thumbnail history of Saudi Arabia at the beginning of the movie “The Kingdom” omitted it entirely – but few events have proved more crucial in spawning the skulking menace we now face.
Posted by Papa Whiskey at 1:44 PM

I have never understood the numbers. Why did a few hundred zealots take over an entire country? Is it the maniacal manner in which these people tend to behave? I know that if and when jihad hits my town I'm going to be armed and ready, not scared and intimidated. Or maybe it's true that the umma gravitates back to its roots which of course is jihad.