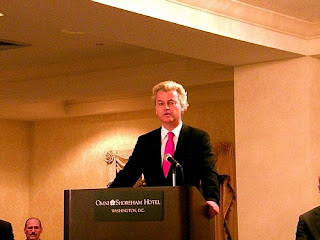 Patel went on to rhetorically bleat, "Shouldn't Capitol Hill be amplifying our tradition of pluralism rather than returning to the dark days of racism?" (as though resistance to Muslim aggression has anything whatever to do with race) and "Should we engage one-fifth of the world's population by punching them in the mouth or by reaching our hand out in friendship?" (The question raised by Fitna, of course, is just who has been punching whom.) Patel is the head of something called the Interfaith Youth Core and appears to be a great favorite of the tax-funded "public" media. It is accordingly unlikely that this is the last we'll hear of him.
Posted by Papa Whiskey at 5:11 PM