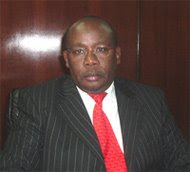 On August 1, Doudou Diène was replaced by Githu Muigai of Kenya (shown at right) as UN Special Rapporteur on contemporary forms of racism, racial discrimination, xenophobia and related intolerance. Muigai, a Nairobi attorney and a graduate of the Columbia University School of Law, appears at first glance to be carrying forward Diene's campaign against "defamation of religion," which, as I have noted, is a threat to the rights of those of us with the temerity to analyze, criticize, expose and make mock of the inimical aspects of Islam's scripture, traditions, history, and contemporary practice. However, this report describes a setback for the Organization of the Islamic Conference in the UN Human Rights Council in which he appears to have had a hand.

Muigai is managing/lead partner of Mohammed Muigai Advocates in Nairobi. His C.V. may be seen here. ("Mohammed Muigai" is not Muigai's name but the firm's, another senior partner bearing the name of Mohammed Nyaoga.) The firm's address may be found here. UN radio has a brief report on a speech by Muigai here.

With the UN's follow-up conference to the notorious 2001 Durban conference on racism and xenophobia (which turned into an anti-Semitic saturnalia) fast approaching, it is very much to be hoped that Muigai will bring a less doctrinaire attitude to his new position than his predecessor showed.
Posted by Papa Whiskey at 4:54 PM