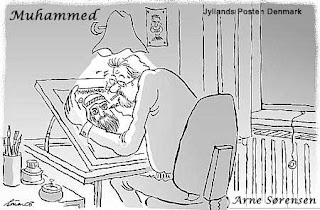 From Baron Bodissey at Gates of Vienna comes word that Flemming Rose, the culture editor of the Danish newspaper Jyllands-Posten whose publication of a dozen caricatures of Islam's prophet Muhammad touched off Muslim demonstrations against freedom of expression worldwide, has written a book on the crisis and tried to shop it to American publishers -- without success.

“They are enthusiastic about the project, but concerned about the consequences that may ensue if they publish the book,” Rose told the Danish paper Berlingske Tidende.

This is the third time -- and the third different medium -- in which the leadership of the American mass communications media has cravenly capitulated to intimidation rather than push back against Muslim demands for self-censorship. First came the near-unanimous refusal of American newspapers to print any of the relatively tame Muhammad images with their coverage of the original crisis in February 2006, despite their manifest centrality to the story and the clear imperative to show solidarity with a fellow journalist. Only three major American papers had the guts and integrity to do so: the Philadelphia Inquirer, the Austin American-Statesman, and the Rocky Mountain News of Denver. The editors of the rest (including the one for whom your correspondent then wrote) justified their pusillanimity with weasel words about "good taste" and "editorial judgment" and "respect for Islam."

Then came the capitulation of American television, in the person of the Comedy Central network that broadcasts the cartoon show "South Park." Much beloved by kids of all ages for an outrageous brand of humor that holds nothing sacred, "South Park" in April 2006 addressed the Muhammad cartoon crisis in a two-part episode on "The Cartoon Wars." The show's position, of course, was that the right to free expression is absolute and ever in need of strong defense. And "South Park's" creators did push back, by showing a cameo cartoon image of Muhammad. But Comedy Central's executives wouldn't allow that image to be shown, out of fear of reigniting "the intense and deadly reaction" of the Muslim world to the Danish cartoons. A black screen was shown instead, with a message from the "South Park" team citing corporate censorship as the reason.

And now we have American book publishers' spurning of Flemming Rose's report on the crisis, a far more egregious incidence of pre-emptive capitulation to Muslim demands than Random House's recent decision not to publish a bodice-ripper novel about Muhammad's bint. While the latter is mere entertainment, the former is critically important information of which the American people are in dire need. The American reading public should raise an unholy stink about this until some publisher reconsiders -- or at least grows a pair -- and puts Flemming Rose's book on the Muhammad cartoon crisis into print.
Posted by Papa Whiskey at 8:57 PM